Home Whats on The Venue Find Us Links The Music Contact

In our  venue at The Sun in Windlesham, Bracknell Folk meet on Tuesday evenings from 8:30 p.m. There will be singers’ nights when performances will come from players and singers on the floor (the pub does some decent ale, but that’s not what I meant) and guest nights (possibly even guest knights) where we will bring singers and musicians from the world beyond to entertain.

So come along!  Be a part of it!  Enjoy the craic!

…and for those of you who like to perform, polish your act and bring it along (or if you prefer to act Polish, that’s alright too – we’re not prejudiced).

Oh, the roar of the greasepaint! The smell of the crowd! . . . (exeunt stage right) 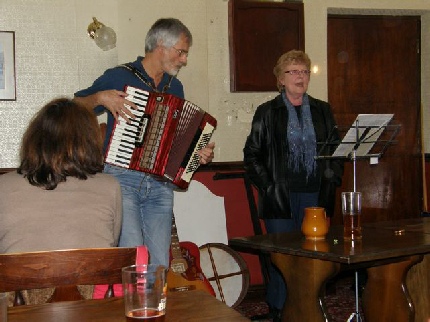 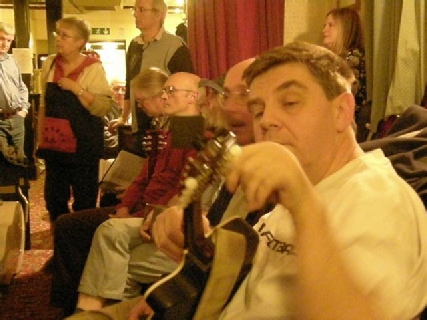 Bracknell Folk Club has been around since the folk revival of the 1960’s (still not as long as my Uncle Alf had his bunion), but by 2009 had run out of steam and the organisers had decided that  the 29th July, 2009 meeting, which would have been the last before the summer break was to mark the end of Bracknell Folk Club.

In its heyday, the club has hosted guests such as Clannad, the Copper family and the Wilson family. In fact, on one memorable occasion, the Coppers and Wilsons performed together at the club. With a history like this, it seemed a shame to let it fade away, so an enthusiast (a sucker?) was  found to inject new life into the club and raise it from the ashes (no cricket jokes please!).  We began our regular Tuesday nights at The Sun in Windlesham on 17th November, 2009.